Review: Hail the Stars and Stripes, and the Radical Moves 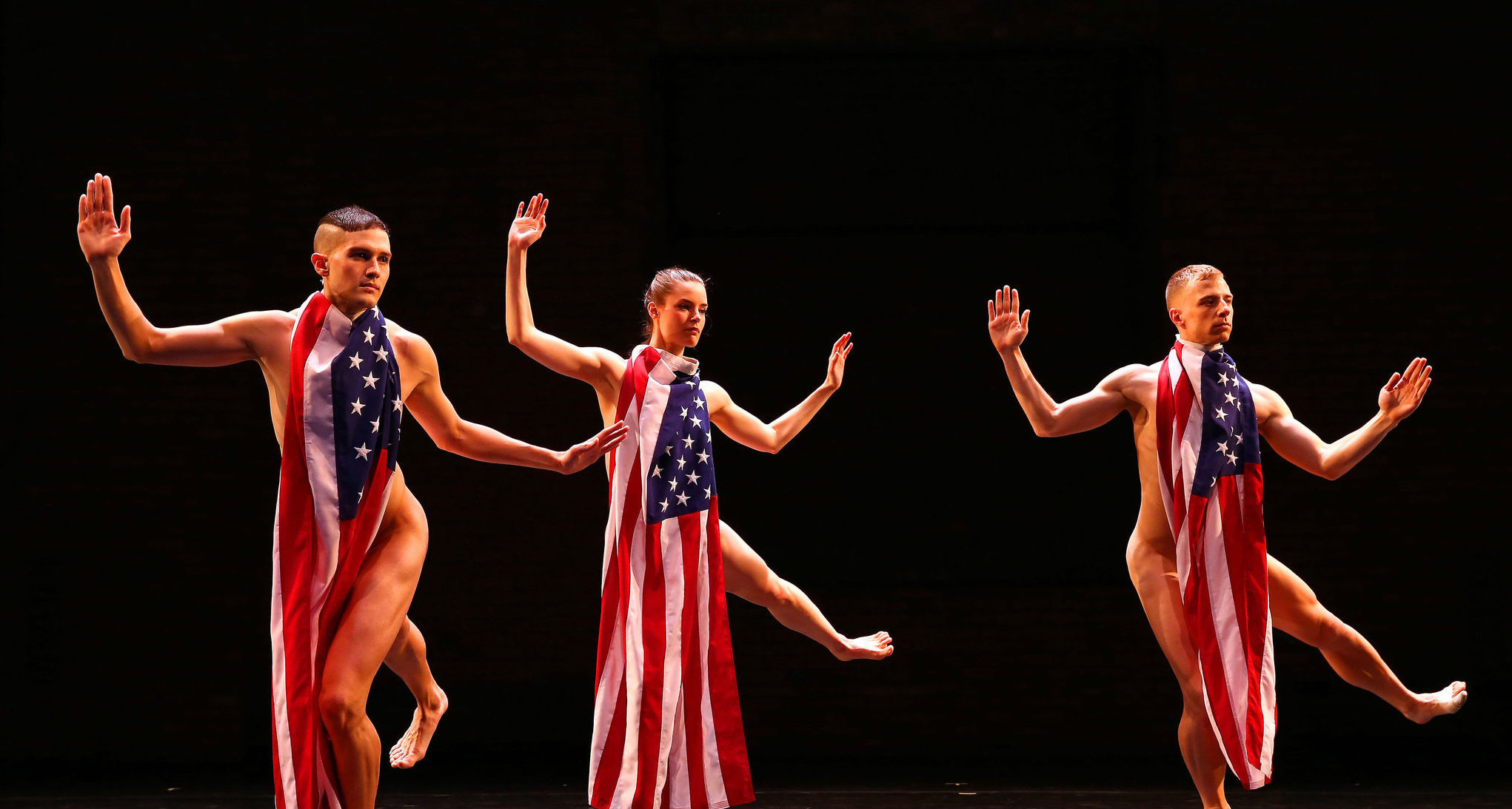 Review: Hail the Stars and Stripes, and the Radical Moves

The choreographer Stephen Petronio is a bad boy made good. Beginning in the 1980s, he developed a brand of gender-bending modern dance that seemed fashionably advanced in its views of society and its taste in music and design.

Of late, however, he’s been looking back with his project “Bloodlines,” in which he revives pieces by the radical choreographers who paved the way for his own work. This is certainly good in theory; practice has shown it to be very good. And Mr. Petronio isn’t sticking himself in the past; each time, the program ends with a new creation of his own.

This is the third year of “Bloodlines.” Merce Cunningham’s “RainForest” (1968) was the great acquisition of the first, Trisha Brown’s “Glacial Decoy” (1979) of the second. The program Mr. Petronio is presenting at the Joyce Theater this week — and in which he returns to the stage at 61 — honors Yvonne Rainer and Steve Paxton, two influential New York postmodern choreographers who were contemporaries of Ms. Brown (who died on March 18), and Anna Halprin, an older West Coast experimentalist who may have influenced them all.

It’s a fabulous, mind-expanding program — very well performed — that succeeds in making Mr. Petronio’s premiere, the appealing “Untitled Touch” (2017), seem the most traditional and least tough item. It begins with three pieces by Ms. Rainer from the era when she and others were pioneering so-called postmodern dance: “Diagonal” (1963), “Trio A With Flags” (1966/1970) and “Chair-Pillow” (1969).

Are these tasks or dances? You change your mind as you watch. In “Diagonal,” the dancers flatly execute movement assignments. There’s no music. One or another of them calls out “1” or “5” or “B,” at which point a subgroup promptly crosses the stage in a particular way (hands on hips with elbows back, for example). You quickly learn how to appraise what characterizes each assignment. Then some moves get under your skin, especially quick pivots in which the dancers reverse to face the opposite direction and then back again.

“Trio A With Flags” begins with an arresting gimmick: The dancers are naked but for American flags tied around their necks like calf-length bibs. The movement is from Ms. Rainer’s seminal “Trio A”: a long string of nonvirtuoso movement that seems either devoid of phrasing or intended to redefine our idea of a dance phrase.

Ms. Rainer once issued a dance manifesto that included the call “No to theatricality.” But was she actually also redefining theatricality? As the dancers move, you see all of those naked bodies, but the aura of nakedness keeps changing; the way the flag falls from the neck keeps altering the whole shape of the body and the lines of the dance. (Then we see four other dancers do more “Trio A,” wearing clothes. It looks like a different world.) Both flags and movement make strong theatrics.

In Ms. Rainer’s “Chair-Pillow,” the dancers, facing front, execute a basic routine of sitting, standing and gesturing (each has one pillow and one chair) to Ike and Tina Turner singing “River Deep, Mountain High.” All the song and dance share is pulse, but that becomes weirdly fascinating. The dance meter is so flat, the manner so objective that the performers seem both alienated from the music and driven by it.

Mr. Paxton’s solo, “Excerpt From Goldberg Variations” (1986), performed by Nicholas Sciscione to part of Glenn Gould’s recording of the Bach score, is the evening’s knockout. Here the movement really is virtuosically musical — earlier postmodern dance was opposed to conventional musicality — and yet this musicality is largely of impulses within the torso. Although Mr. Sciscione often travels powerfully all around the stage, the sovereign image is of him, back to the audience and standing in one place, moving from the waist up, showing rapid movements of shoulders, pelvis, waist, spine that keep close company with Bach.

Mr. Petronio performs Ms. Halprin’s “The Courtesan and the Crone” (1999), a diva number that deconstructs the diva. The lavish gown and the youthful mask are removed. Age remains. Closing the program, Mr. Petronio’s “Untitled Touch,” to an original score by Son Lux, shows us same-sex and opposite-sex partnering. The piece is agreeably compelling, though the steadily pulsating music, softly rock-related, makes the movement feel more anodyne than it deserves to be. The climax is a sustained duet for Mr. Sciscione and Joshua Tuason, whose legs have the exceptional length and tapering shape that would be remarkable on a ballerina. Here they become spears, beacons, gestures; Mr. Sciscione, with his greater upper-body strength, is an ideal foil in a dialogue between equal but contrasting forces.