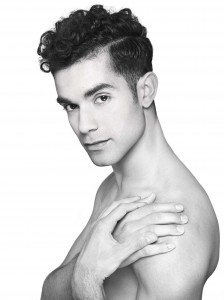 ERNESTO BRETON, a native New Yorker, began his formal training at the Fiorello H. LaGuardia HS for the Performing Arts. He studied at SUNY Purchase from 2008-09 and then transferred and graduated from The Juilliard School in May 2013, under the artistic direction of Lawrence Rhodes. He has had the opportunity to dance works by José Limón, Andrea Miller, Raewyn Hill, Eliot Feld, Pam Tanowitz, Alexander Ekman, and William Forsythe. In 2011, Breton was a member of Project Maru-a-Pula, an interdisciplinary arts outreach group, created by Juilliard students, that traveled to Botswana, Africa, to empower their youth through workshops and community enrichment programs. He has also had the opportunity to dance in Maurice Bejart’s Bolero with the Paris Opera Ballet, as part of the 2012 Lincoln Center Festival. After graduating, Breton has danced in several works and projects, as a fellowship dancer, with the Merce Cunningham Trust. He is also a performer in the off-Broadway immersive theater production called Sleep No More and joined Stephen Petronio Company in 2016.